Situated on a high hill, Nor Varaga Monastery or Varagavank (XII-XIII) is surrounded by forested mountains and picturesque ravines. This monastic complex was established by King David II of Kyurikian dynasty in 1193-1198 and expanded by his grandson Vasak II between 1234 and 1237. Originally this monastic complexwas called Anapat (Desert; or in this case Hermitage), however in 1213, when Vaspurakan’s famed Varagavank Monastery near Lake Van was destroyed by the Mongols, and Patriarch Ghukas brought to Anapat Monastery holy relics-namely a piece of the True Cross-Anapat was renamed Nor Varagavank (New Varaga Monastery).

The most ancient erection of the ensemble is Surb Nshan (Holy Cross), positioned in the southeastern part of the complex. The two-apse church’s vaulted gable roof was not preserved, but on both sides of the western entry you will find two splendid ornamented khachkars (cross-stone), which end in refined semi-circles. 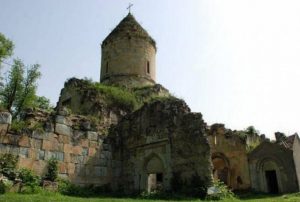 The monastery also served as Kyurikian family’s burial vault and mausoleum; the two-storied burial vault, different by its original volume-spatial composition, joins the northern wall of Surb Nshan, while the two-storied chapel joins the church from the south. As there aren’t any stairs leading to the top tiers of either building, both of which supposedly served as side-chapels for the church, it is supposed that a removable ladder was used to access them.

The church of Surb Astvatsatsin (Holy Mother of God) is considered to be the most important structure in the complex. Designed by architect Gazan, it’s a classic example of Armenian spiritual architecture: rectangular on the outside, cruciform on the inside. One of its two entrances stands out because of its magnificent and not typical to Armenian medieval culture design: dark-violet and light-blue stones in the form of stars, diamonds laid out as a mosaic;  and plant ornaments carved on them.

Superbly carved medieval khachkars can also be found in various parts of the complex. Especially noteworthy among them is a big khachkar,created by master Vardan in 1620, which stands near the vestibule of Surb Astvatsatsin church.