6 km southwest of Tsaghkavan Village, overgrown with lush vegetation, in a picturesque valley of Hakhum River, in the shadow of an enormous rock  one of the lost monasteries of Armenia – Shkhmurad (XII-XIII) is located. The complex may be a bit hard to spot in the shadow of the cliff above, however it is an excellent example of architecture blending in with nature. Ruins of walls and auxiliary erections are preserved in the environs. 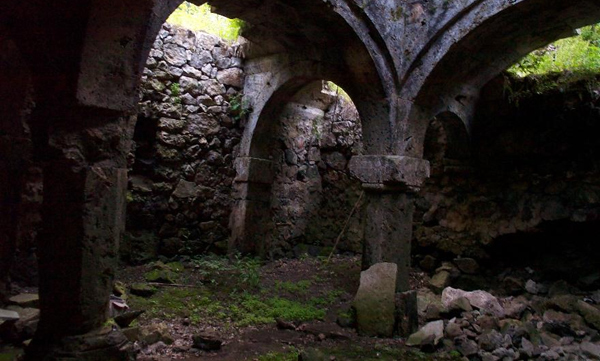 The complex consists of the church of Holy Virgin, two vestibules, and a tumbledown single-nave chapelcalled “Khoranik” (Little Apse), which is the most ancient structure in the complex. According to the inscription on the western wall it was built in 1149, before the main church construction began. The church of the Holy Virgin (1184) is the focal erection of the ensemble. It was built from local,smoothly trimmed yellowish porous stone of volcanic origin. As many domed-hall churches of the time it is rectangular on the outside and cruciform inside, with one main and four small altars.

The Monastery served as cultural and educational center by the nearby villages, and was a place of pilgrimage. Shkhmurad complex was partly restored to life in 17th century. There is a number of valuable khachkars (cross-stones) on the monastery territory, among them the partially destroyed khachkar , a work of a famous artist Kiram, and a khachkar that bears images of human figures.