Lori Berd (Lori Fortress) village, just east of Stepanavan,encircled by wonderful mountain landscapes,is a place rich with historical and cultural monuments. It is a site of 2nd millennium BCE necropolis and dwellings, 6 churches, 26 khachkars (stone-crosses), two old cemeteries, 17 tombs, as well as the remains of medieval fortress Lori Berd (X), located on a small peninsula, along the deep gorge cut by Dzoraget and Urut rivers. The Fortress was the capital of David Anhoghin (989-1049) of Tashir-Dzoraget Kingdom, and the feudal center of the Kyurikian family. 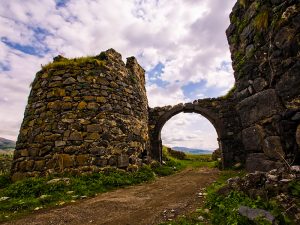 Preserved inside the fortress are two bathhouses, with complex double row clay piping inside the masonry – presumably for hot and cold water.

The ruins of the fortress reveal its rich history, which was not always amiable. The rectangular roofed structure, incorporating various medieval tombstones was Christianized by a couple of flanking khachkars. A shallow niche in the southern wall faces Mecca, a reminder of Muslim occupation of the fortress till the 18th century. Few traces of its recent history attest to the fact that the fortress had inhabitants during Soviet times. A medieval bridge over Urut River is reached from the gate by a steep and winding boulder-cobbled path, but only one pier base is left of a second bridge over the Dzoraget.

However, time heals all and Lori Province remains a beautiful and magical region of Armenia. With its fresh air, quiet and serene mountains, rich past, countless historical landmarks, generous soil and hospitable people, it deserves a place on the must-list of anyone traveling in and through Armenia.