One of the dazzling gems of Armenia is Lake Sevan. Located 60 km from Yerevan at a height of almost 2,000 m, Sevan is the second mountain lake in the world with reserves of fresh water, first being Lake Titicaca. Its water is so clear and pure that, according to legends, only stars and gods drank from it. Maxim Gorky once said that the waters of Sevan were like “a piece of the sky that had descended to the earth among the mountains”.

Sevan was born a few thousand years ago due to volcanic processes occurring in the surrounding  Geghama Mountains. 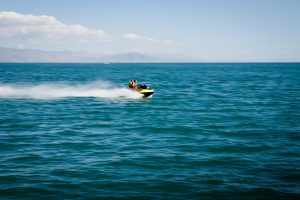 With its many different faces, Lake Sevan is not a sight you are likely to forget. The surface is usually of deep turquoise color, but sometimes it’s cut into green, azure and indigo geometrical shapes, it can be tranquil, mirror-like, reflecting the surrounding mountains and villages or can be black and temperamental. There are numerous beaches along the entire shore as well as resorts, hotels, campgrounds, and restaurants, where you can flavor freshly caught local fish. Some of the beaches are entirely covered with sea buck-thorn trees, a very healthy fruit that is used in the Armenian cuisine, but mainly for medicinal purposes.