150 km from the capital, on the west side of the main Alaverdi road, almost invisible in the trees, perched on a rocky outcropping, is the tiny hamlet of Kober. 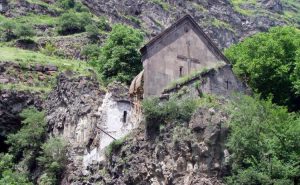 The reward for the sometimes strenuous climb is one of the most beautiful places in Armenia, Kobayr Monastery (XII): an ancient and sacred place where springs seep out of the rock, where trees and vines twine among the intricately carved blocks of the monastery. The name of the monastery originates from the Georgian word kob and the Armenian word ayr both of which mean cave.

Kobayr, though presently in ruins, is neglected neither by locals, nor foreigners. This monastic cloister in one of most remarkable architectural complexes of medieval times, the history of which is closely connected with activities of famous medieval Armenian royal and feudal houses. 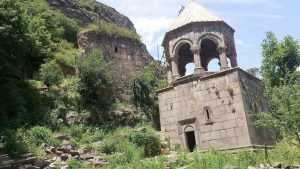 According to the inscription on the entrance bulkhead, the daughter of king Kyurik II, Mariam, built the church in 1171, but in 13th century the Monastery was acquired by Georgian Orthodox Zakarian family, who brought Chalcedonian Christianity to Armenia.This explains several Georgian inscriptions and frescoes found on the walls, which exist alongside Kobayr’s original Armenian inscriptions.

The essential part of the monuments consists of three churches, belfry-burial vaults, refectory, chapels, sanctuary of Sghnakh, khachkars (cross-stones) and remnants of fortress walls. Uncommonly harmonic combination of the complex structures with surrounding picturesque nature makes the panorama of the cloister exceptionally impressive.