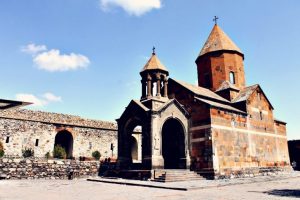 The Khor Virap (in Armenian “deep dungeon”) monastery was originally built in 642 CE.  It did not take on its current and final incarnation until the 17th century. But  before its founding, the former prison site was notable for holding the man who would become Saint Gregory the Illuminator.

Before attaining sainthood, Grigor Lusavorich imprisoned in a cell at the bottom of a pit dug into an Armenian hillock. For 13 years the man survived by being secretly fed by local Christian women. 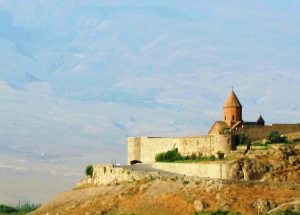 Lusavorich cured the ruler, King Trdat III, of a disease and subsequently converted the monarch to Christianity.Soon the country was the first officially Christian nation in the world.

The monastery continues to be a holy site of the Armenian Apostolic Church and an important place to visit which locals often visit for a baptism or after a wedding to perform a “matagh” or “sacrifice,” often of  a sheep or a chicken. The walled, religious complex stands before the snow-capped flanks of Mount Ararat.