By turning from the main road onto a scenic and narrow path that winds along a small, but turbulent mountain stream, through a temperate forest,you can reach one of the places in Armenia that never fail to impress any visitor with its serenity and beauty. Here, in the harmony of untouched nature, hidden among dense oak woods, rests one of the gems of Armenian architecture – Haghartsin Monastery (X-XIII), built mostly under the patronage of the Bagratuni Dynasty. According to the legend, an eagle was soaring over the Monastery on its dedication day; consequently the complex was named the Monastery of the Playful Eagle (hagh- game, artsiv-eagle). 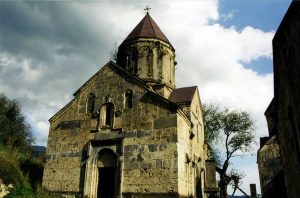 This monastic complex includes three churches, two gavits (vestries), a refectory, a group of chapels andseveral khachkars (cross-stones). The biggest structure of the complex, church of Surb Astvatsatsin (Holy Mother of God), deserves special mention, as it is the artistic dominant of the ensemble.The tall sixteen-faceted dome is decorated with a graceful arcature. This adds to the optical height of the dome and creates the impression that its drum is weightless.The eastern bar-relief differs in composition from the similar bas-reliefsof other medieval churches. It depicts two men in monks’ attire, pointing at a church model, anda dove with half-spread wings placed between them.

The refectory, built by architect Minas in 1248, is one of the two such structures remaining in Armenia (the other being in Haghpat Monastery). It is considered to be a masterpiece of Armenian architecture. Rectangular in shape, it’s divided by double columns into two parts, each with a skylight above.

Like some other monasteries, Haghartsin Monastery has a sundial. In Armenia, the first sundials appeared in 1st century BCE, during the reign of Artashes II.Churches most likely used them to learn the time of the Mass. Another remarkable find here is a large bronze boiler with four handles in the form of lions, which is a treasured sample of medieval metallurgy.

The combination of natural beauty and architectural mastery is palpable here; Haghartsin is another gem of Armenian medieval architecture and  another testament of people’s spirituality.