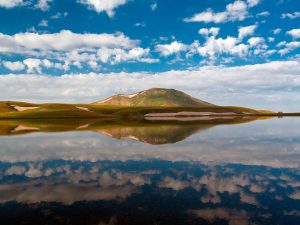 The mountain range has a volcanic origin, it consists of many extinct volcanoes. The length of the range is 70 km, the width is 48km.

The highest peak is Azhdahak (3597m). In the crater of Azhdahak there is a lake, which is fed by melt water. There is a huge amount of sculptures of mythological creatures, known as “vishapner” (dragons).

Geghama Mountains are the most appealing for trekking. During hiking, you will see prairies and picturesque lakes. The surroundings of them are comfortable for camping 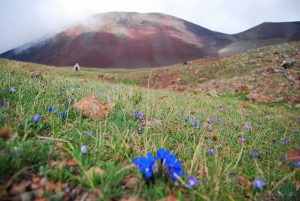 If you are fond of adventure tourism, then hiking in Geghama Mountains is the ideal choice of exploring the country.

On the main part of the petroglyphs you can see people during hunting and fighting.

There are also some geographical elements, such as lakes, rivers, springs, also astronomical bodies and phenomena, such as the Sun, the Moon, star constellations, comets and lightning.

According to the legend the mountains were named after a young and strong man Gegham, who was in love with a girl named Khosrovanuysh. Gegham promised to free the local population from the seasonal floods which damaged everything.

From year to year, every day Gegham climbed the mountains carrying a big basket with scum seeds. On the top he planted the seeds in those barren lands.