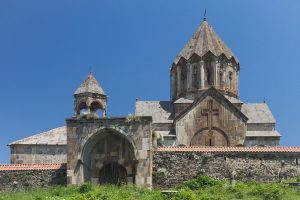 Gandzasar Monastery is one of the most important architectural monuments of Artsakh. It is located near the town of Vank of Mardakert district, in the very heart of Artsakh’s historical province of Khachen. For long a symbol of Artsakh’s Armenian statehood, the word “Gandzasar” is translated from Armenian as “Treasure-Mountain” (with “gandz” meaning “treasure” and “sar” meaning “mountain”). And it is a treasure indeed. According to renowned Russian scholar A.L.Yakobson of St. Petersburg’s Hermitage, Gandzasar Monastery is “the encyclopedia of Armenian architecture.”
Professor Charles Diehl of Sorbonne, a prominent French art historian and specialist of Byzantium, called Gandzasar the third most important artifact of Armenian monastic architecture that is on the list of world architectural masterpieces.

Locals believe that the monastery was founded on the place of a shrine containing the scull of St.John the Baptist, which was brought to the land of Artsakh directly from Palestine.
The 13th century Armenian author Kirakos Gandzaketsi, himself a native of Artsakh, wrote in his “History of Armenia”: “…there where stands their family vault, Ishkhan (i.e. “prince,” in Armenian) Asan-Jalal built a church with exquisite adornment, a celestial cathedral dedicated to the glory of God…” By the mid-13th century, Asan-Jalal of Khokhanaberd, founder of Artsakh’s Jalalian aristocratic family, emerged as the most powerful Armenian feudal ruler in the Eastern Territory of Armenia. Gandzaketsi describes him as: “The Great Prince Asan, who is flatteringly called “Jalal,” a man pious, honest, and Armenian.” The central Hovhannes Mkrtich (St.John the Baptist) Cathedral is masterly embellished with reliefs depicting the Crucifixion, Adam and Eve and dozens of other stone figures, including the sculptures of the kings of Khachen holding two models of the Cathedral above their heads. According to an inscription on the wall of the Cathedral, it was completed in the year 1236. Overall, up to 150 Armenian stone-borne texts are found on the walls of the Cathedral, including a wall-large inscription made by the order of Asan-Jalal himself.
Gandzasar Monastery represents the so-called “Gandzasar Style” of medieval Armenian architecture. Two other important Armenian monastic complexes, Hovhannavank and Harich, located far away, on the territory of today’s Republic of Armenia, replicate Gandzasar in many details.